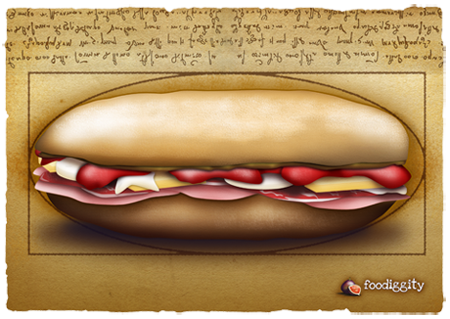 The Sangweech… A simple concoction of meat, cheese, and condiment placed in between two slices of bread. But a sandwich it is not. Nor is it a hero, sub, or [shudder] hoagie.

While steeped in tradition and adhering to a certain code, a Sangweech becomes something more — and it holds a special place for those who reside within the Sangweech region (New Jersey, NYC, Long Island).

We briefly touched on this subject after a trip to Fiore’s in Hoboken, NJ — but it has been long overdue for a more thorough investigation. Foodiggity proudly presents The Anatomy of a Sangweech.

First and foremost, a Sangweech must contain meat. And the ultimate Sangweech usually has at least two parts pig protein. Now get ready for this… bacon is not one of them.

Roast beef, chicken, and turkey are acceptable meats — but these non-pig proteins rely on certain variables to qualify it as a Sangweech, e.g., location, condiments, etc.

Again, a cheese worthy of inclusion in a Sangweech must end in a vowel. If using mozzarella, it must be made in-house. Provolone should not be the rubbery, semi-translucent slices that most are familiar with, but rather cut into small wedges for texture’s sake.

Also there is no melting allowed, unless included in a ‘parm’ of some kind. More on that later.

Condiments also become important when assembling a certified Sangweech — but choose them wisely. Some acceptable enhancers are as follows:

Attempting to use the following condiments on a Sangweech could get you whacked in certain parts of Jersey — or at the very least, you will be referred to as a ‘maddagon’.

There are a few exceptions to some of the rules stated above. In regards to ‘parms’, e.g. chicken, meatball, or eggplant parmigiana sandwiches — the location becomes a crucial factor. For instance, a meatball parm ordered from Vitamia & Sons in Lodi, NJ is a Sangweech. A meatball parm from Rick’s Deli in Bernardsville is not.

So there you have it… The rules and regulations that make a Sangweech something special. At least it is to those who grew up with the term — especially those who truly cannot pronounce ‘sandwich’. Go get one.