The infamous ’30 Rock Sandwich.’ After this episode aired, the origin of the sandwich had been shrouded in mystery. Did it actually exist? Where? Who? How do I get one just like Liz Lemon did? Long rumored to originate from Brooklyn, it was finally revealed by an inside source, that it hailed from none other than Hoboken, NJ — Foodiggity’s neck of the woods.

As part of his 93 Plates project, ‘The Wandering Foodie’ Hagan Blount and I were heading into Hoboken, and we had Fiore’s Roast Beef Special on the brain. Today is our Sandwich Day… God bless us indeed!

Roast beef, roasted peppers, homemade mozzarella, and gravy. This is what we like to call a ‘sangweech’ here in Jersey. Hagan—having not grown up in this area—had never heard the term. We were about to break his sangweech cherry, and the boys from Fiore’s and I were just the guys to do it.

The anatomy of a ‘sangweech’: 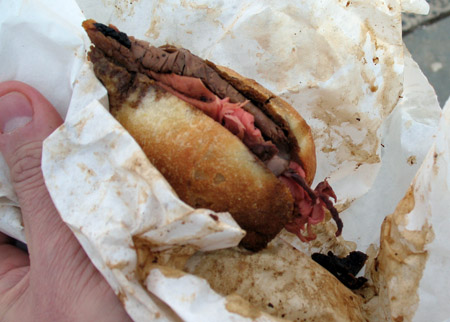 But the sandwich delivers. The bread, meat, cheese, and condiment are all distinct flavors and textures, running on all cylinders. The roast beef is a perfect mix of rare and well-done, and the bread is as good as you’ll find on any sandwich. The mozzarella provides some salt and texture, and the gravy… Oh joy the gravy! Sandwich Day could possibly be the most wonderful day of all.

Thanks to Hagan Blount for inviting foodiggity.com to participate in his 93 Plates project. We hope Hagan’s first time was special, because you never forget your first sangweech.

His account of our Sandwich Day can be found here.