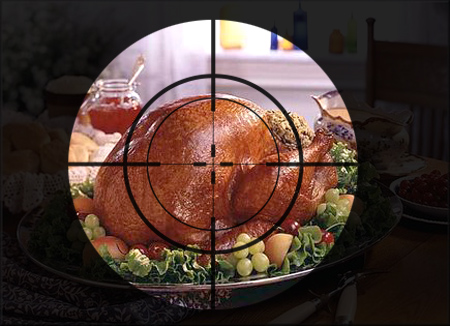 Turkey on Thanksgiving — a more stubborn American tradition you will not find. The problem is that, year after year of our obligation to serve turkey, it has become excruciatingly boring and predictable. And most people seem to have arrived at the same conclusion… That turkey actually sucks. There I said it.

Our secret loathing of turkey is never more evident, than when we attempt to break tradition with variations on a theme. Usually at the hands of adventurous home cooks, big business, or herbivores — these lame attempts at creativity do nothing more than offer insight into our true feelings towards the turkey.

Today, Foodiggity explores some of these efforts that we believe are thinly veiled hate crimes against the turkey, and ill-advised cover-ups for its shortcomings.

When deep-fried turkey is done correctly, it can be fantastic. But then again, someone can deep-fry a shoe and it would be somewhat palatable. Deep-frying a turkey is a perfect example of how we redirect the frustrations we harbor for this suffocating tradition. But in this case, it comes with serious risk — as any fireman that works on Thanksgiving could tell you.

This means that some poor turkeys will not only die in vain, but will be humiliated further in a grease-fueled fireball. All by some closet turkey-hater who not only burned a hole in their deck, but just ruined Thanksgiving for everyone. 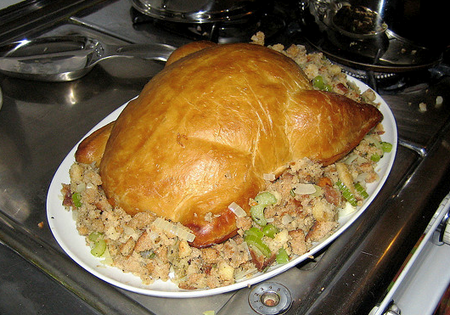 When the weaker species of vegetarian is allowed to participate in Thanksgiving, Tofurkey happens. Tofurkey is a pseudo-turkey-like substance, usually made from seitan (wheat protein), or the dreaded tofu. All helped along with a grain or bread filler, and broth to make it a bit less excruciating.

Sometimes veggie eaters will even attempt to make the tofurkey appear like the actual bird. A bird that we’ve already established is bad enough when it’s real. 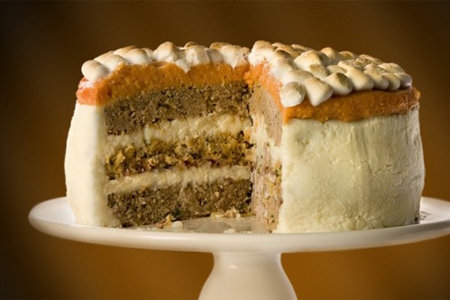 Turkey Cake is what happens when we mix the recent trend of extreme food, with pent up turkey hate. A recent recipe entry on CHOW, the Turkey Cake is meant to save table space, and provide one-stop shopping by combining all Thanksgiving staples into one food item.

This becomes further proof that turkey is nothing without its complementary sidekicks — sort of like a culinary Garfunkel.

Turducken — the thing-inside-another-thing food concept, that opened up the flood gates for such monstrosities as the Pumpple and Denny’s Fried Cheese Melt. Besides being somewhat brilliant, the Turducken is a clear sign of our lack of faith in turkey as a solo act. It also shows the ultimate disrespect, by sodomizing the poor bird with two other forms of poultry.

So there you have it. Try to have a Happy Thanksgiving, even if you’re having Tofurkey, or you inadvertently burn your house down.