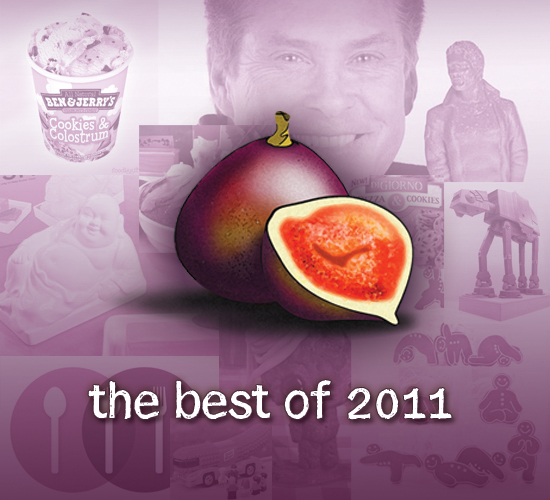 2011 was a banner year for Foodiggity. For one, we finally monetized the site. And since we haven’t changed our stance on how we feel about banner ads, i.e., we hate them, The Foodiggity Shop seemed like a logical choice, and launched in August.

We’d also like to think that with another year under our belt, Foodiggity has finally become a reliable source for the best food-related nonsense on the internet. So without further ado, The best and sometimes worst Foodiggity of 2011. See you in ’12.

The Most Nightmare-Inducing Post of The Year…
The Dancing Squid

Breast Milk Was a Thing, And We Have Photoshop…
If Ben & Jerry’s Made Breast Milk Ice Cream

Our Hottest Product of the Year, That’s Supposed To Be The Coolest…
The Buddha Butter Dish

The Ill-advised Food Merge of The Year…
Pizza and Cookies… In The Same Box!

We Got Cultured This Year…
Food Art Friday

Thanks to everyone for a great 365 days and Happy New Year. We’ll try to do better next time.