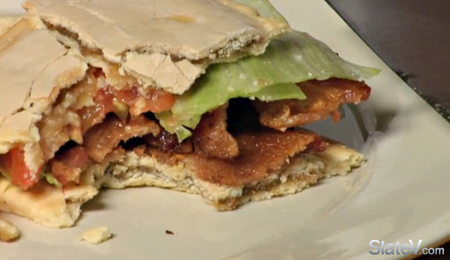 This particular food crime involves the construction of a Bacon, Lettuce and Tomato sandwich, substituting Pop-Tarts for bread. Although the use of brown sugar/cinnamon Pop-Tarts is inspired, Dan and Mark do encounter some structural issues — both with the Pop-Tarts and the bit itself.

Part three of the session takes an ‘Asian Approach’ to taste bud torture, where the results can only be described as Sandra-Lee-like.