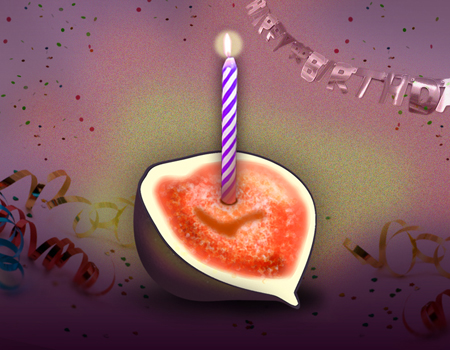 Today, the greatest food and lifestyle site ever* is off the formula and is switching to whole milk, i.e., Foodiggity turns one year old.

It was one year ago today that I hit the ‘publish’ button on our welcome post, and began my campaign for total internet food culture domination. Originally conceived to be ‘more than your average food blog’, Foodiggity has seen a few transformations over the past year. Some changes were based on new trends in food and our own web traffic — some were made in response to life-changing events. All the while, still keeping with the original plan to offer the best food-related nonsense that I could find.

As our first year of existence comes to a close, we start year two with some exciting plans to take Foodiggity to the next level. A site redesign is planned for early next year, which will make the site a little easier to navigate, and a bit less ‘2009’. More recipes, reviews, and guest posts are planned. And, as I am also a year older, the material should get a bit more cynical and heavily influenced by my increased irritability.

Thanks to those who have frequented the site over the past year, especially to those who follow us, like us, and get fed. Special thanks to our contributors from early on, and to the current batch who sends us crazy shit all the time. Keep it coming.

Thank you for stopping by… Foodiggity likes you too. Be sure to check out our ‘Best and Worst of Year One’ retrospective… here.