The five-dollar shake. In 1994 this may have seemed ludicrous, even in the alternate universe that was Pulp Fiction. Now—15 years later—Quentin Tarantino has created another masterpiece with Inglourious Basterds, and the five-dollar shake is not only reality, it is creating single file human masses rivaled only by Space Mountain.

The Shake Shack, Madison Square Park, New York City. For those not familiar with The Shake Shack and “the line”, the Shake Cam explains it all. Keep in mind that this camera is set up so potential customers can “plan accordingly”. It even has a weather report to figure out the best way to brave the elements while standing relatively still for the better part of one hour.

The cost of a milkshake at the Shake Shack… Five dollars and twenty-five cents sans bourbon. Not only did this immediately bring to mind the classic exchange between Uma and Babarino, it provided a good opportunity to show how we roll here at foodiggity.

Foodiggity decided to brave the Disneyworldesque line and test the Shack’s greatness with a review of one the simplest item on the menu… The Black and White Shake.

The 3 laws of the perfect Black and White Shake.

1. Thickness. Focus now. Thickness is important, nay essential. The perfect BWS should require ribs of steel and a straw with the diameter of a quarter. Patience is indeed a virtue.

2. Color. For reference I have included a Pantone swatch of the ideal color of a BWS. It is not what you might expect. Not beige, certainly not gray, but almost the color of Cancun sand, with a slight pinkish hue. I am not sure how this happens, and I don’t care. I just want one in my belly.

3. Flavor. “Shouldn’t it just taste like vanilla and chocolate mixed together?” Well no. When a perfect BWS is created it creates an entirely new flavor profile. Not vanilla with a hint of chocolate, not chocolate light. It should achieve perfect balance, sort of like a yin yang in a paper cup.

1. Thickness. Now, the base for the Shack’s “Hand-Spun Shakes” is their Frozen Custard. According to the Shack’s site “… our frozen custard is made in a real custard machine – which spins the custards at ridiculous speeds, into a dense, soft, intensely rich consistency.”

Well-played Shake Shack. Two sips and my lungs hurt. This may take awhile. In the meantime let’s check out the hue.

2. Color. Dead on. As if they have a Pantone swatch book back there. 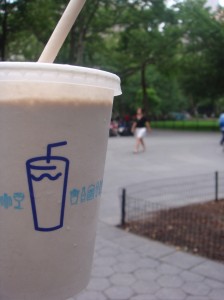 3. Flavor. Sublime. I do realize that I am describing a milkshake. Don’t judge me.

Synopsis. The Line does not lie. Pretty much everything on the Shake Shack menu is certified awesome and it all starts with the simplest item. But is this mix of two ingredients worth five dollars?

I don’t know… but it is pretty fuckin’ good.