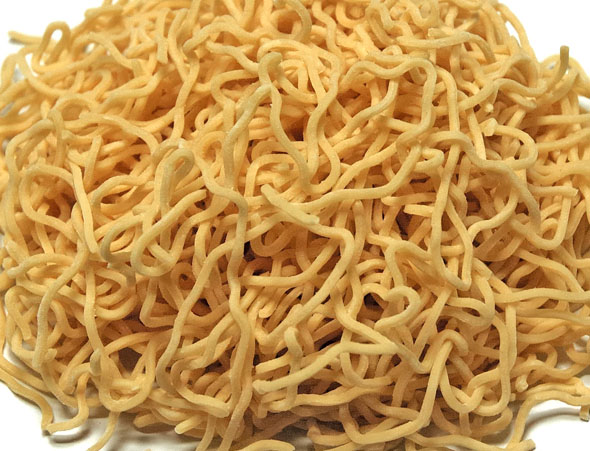 Here at Foodiggity, we’re pretty psyched to welcome a guest post from Hans Lienesch, aka ‘The Ramen Rater.’ If you couldn’t already tell by the moniker, Hans likes his instant noodles. So much so, that he’s dedicated a site to nothing but them, and has since sampled hundreds of unique varieties from all over the world. And now we get his top ten of all time. Hans, go…

Since I was a small child, I have enjoyed instant noodles. It started out with what every other kid in the USA had — Top Ramen. Then came Roasted Ramen, noodles that already had the seasoning within them — no packet! Until these were off the market, and everything changed in my instant noodle world.

My parents took me south to Seattle. And what I discovered at about 12-yrs-old, was that there were now a ton of varieties of instant noodles. With different colored packaging and strange foreign writing I couldn’t begin to understand — making them almost impossible to cook.

Over 30 years later and having officially sampled over 650 different unique varieties, I’ve come up with a list of my favorites. It changes from time to time as I find new varieties to enjoy, but here it is as it stands currently. 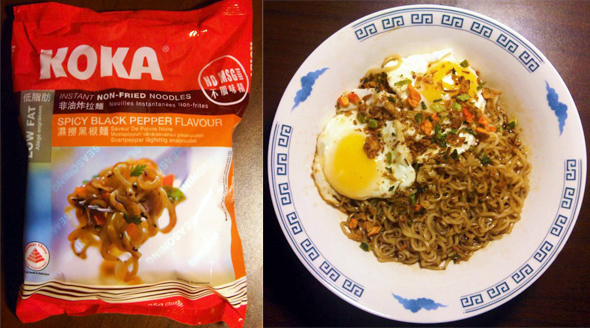 This stuff is amazing; it contains a block of instant noodles that are exceedingly light and very low in fat. This doesn’t end up with low in taste though, especially with its garnish pack’s mention that the veggies vary depending on the season of production! It has a nice peppery taste and a little heat, but not overwhelmingly so. Perfect complement: Goes great with Eggs.

Yeah I know – chicken instant noodles. How boring! Not this one – the broth is very good – it warms one’s innards on a cold day like nothing else. This is especially good with an egg or two added with about 45 seconds remaining as it cooks in the pot — making the broth even heartier. A very relaxing bowl of noodles. Perfect complement: Eggs added during cooking. 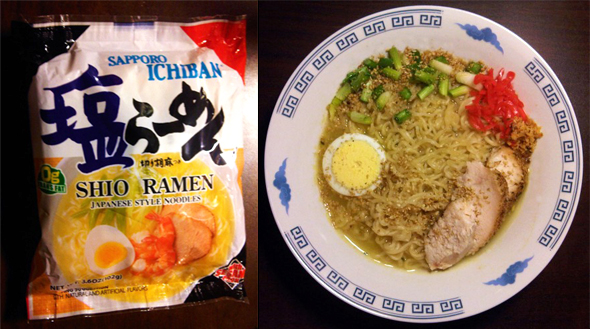 This is a very recent addition to the Top Ten list. Having tried Shio instant noodle varieties in the past, I had a feeling this would be a good one, and it truly was. The noodles were very hearty and the broth had an almost buttery flavor. Comes with a little packet of sesame seeds! Perfect complement: Some baked chicken, green onions and hard boiled egg. 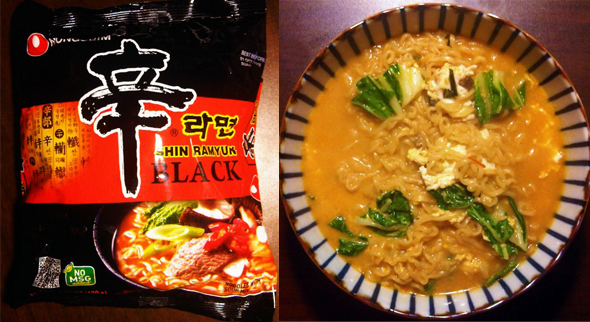 Twenty years after the introduction of the well-known Shin Ramyun, Nong Shim brought out Shin Ramyun Black. A huge block of noodles, a veggie packet that also has freeze dried beef, red spicy seasoning, and onion and oxtail soup packets, make this a culinary onslaught of epic proportion. Perfect complement: Using a recipe from Eat Your Kimchi, add an egg, bok choy and a single slice of processed cheese. 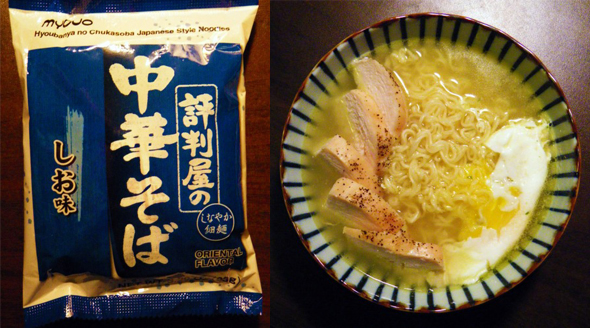 A very good, very traditional instant noodle from Japan. Noodles are a little chewy and the broth has hints of seafood. Perfect complement: A couple of eggs cooked with the noodles, and a little baked chicken with salt and pepper.

Like spicy? Like curry? This one from Indonesia fills both criteria and then some. The noodles are good, but the real star here is the broth – a bit greasy and so flavorful. Not only a hot curry taste, but had sweetness as well. Perfect complement: Fried eggs.

This stuff is great. It’s cooked with a small amount of water as the noodles gobble it all up. The flavor is sweet and salty and purely enjoyable. What’s more is a packet of ground seaweed is included, which makes it all the more enjoyable. Perfect complement: A bit of roast beef and some chopped onions.

Yakisoba is a very commonly enjoyed dish in Japan – and this variety puts a unique twist on it. You fill the box with boiling water and then afterwards, there’s a little drain spout to get rid of excess water. Add the flavoring and stir – then comes the fun as there’s a little packet that dispenses mayonnaise out of one reservoir and mustard out of the other! This is quite good – especially the vegetables. Perfect complement: Nothing — enjoy in its native state!

First off, it’s a jumbo pack, which is helpful as this is such a great tasting package of instant noodles. Second, it comes with a whopping five seasonings – from sweet soy sauce to spicy chili sauce. The noodles are served drained without a broth. Perfect Complement: The flavorings in concert with a couple fried eggs, some pickled ginger and fried shallots make this one not to miss.

Truly the best instant noodles I’ve ever had. I love these – the noodles are flat and very tasty. The seasonings provide a broad range of flavors. Spicy, sweet, full of good flavor. Perfect complement: Some turkey, fried eggs, pickled ginger, fried shallot and Sriracha.