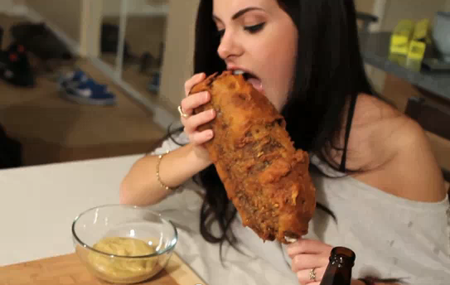 Epic Meal Time is the YouTube channel that combines a few of our favorite things — outrageous food, and watching drunk fucktards risk their lives for the sake of entertainment.

Led by a sort of culinary ‘Johnny Knoxville’, this band of mouthbreathers participates in a series of artery-destroying food abominations. Best described by their given titles — Massive Meat Log, The Greasiest Sandwich Ever, and The Worst Pizza Ever — the videos are as sickening as they are somewhat hysterical.

The most baffling part of Epic Meal Time — besides their crimes against food — is their ability to convince attractive females to participate. As seen in the video for the aforementioned Massive Meat Log.

So, please enjoy these videos while they last. Because, either a cast member’s heart is going to explode, or they will eventually run out of chloroform.