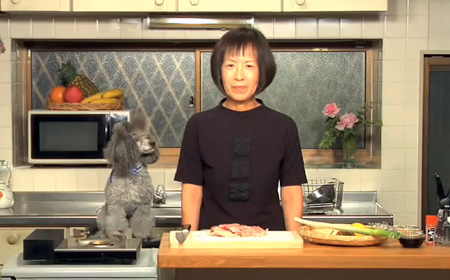 Disclaimer: No dogs are harmed for the purposes of this show, or for the writing of this article.

Just when it seemed as though poodles and Japanese television could not get any creepier, enter Cooking With Dog.

Cooking With Dog is a bizarre Japanese cooking show that can be found on its own YouTube channel. The show is ‘hosted’ by Francis—a seemingly sedated, tear-stained poodle who kindly translates the show for us Engrish. Francis—being a dog and all—relies on a co-host of sorts to do all the cooking.

Apparently under some sort of doggie mind control, the woman is nothing if not completely subservient to the gray poodle. She also appears to have no name, as she never actually introduces herself. Our guess is that she may be a former geisha, still harboring some control and neediness issues.

All the while, Francis sits stoically, appearing downright bored at times, checking this unnamed woman for proper technique and perhaps waiting for some scraps to hit the floor.

Cooking With Dog’s YouTube channel can be found here.