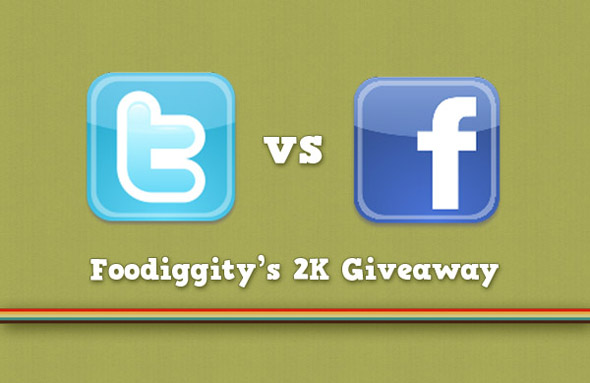 Anyone who follows Foodiggity on a regular basis, knows that when we’re not supplying the best in food culture on our blog, we’re wasting time on social media platforms such as Twitter and Facebook.

At the time of this writing, our number of followers on both platforms has become the same — 1854. So, we thought it would be a good opportunity for a little social media throwdown. Now that it’s all knotted up, we’re racing to get to 2000 followers on Twitter and Facebook. And people are going to win stuff.

So, fans of Foodiggity, it’s simple… The first platform to hit 2000 will host a monster giveaway. Suggest us to your friends and followers, and fans who mention this giveaway (hashtag #foodiggity2k on Twitter, like or share our Facebook post) will be entered to win stuff from The Foodiggity Shop. And if you’re not already following us, do so.