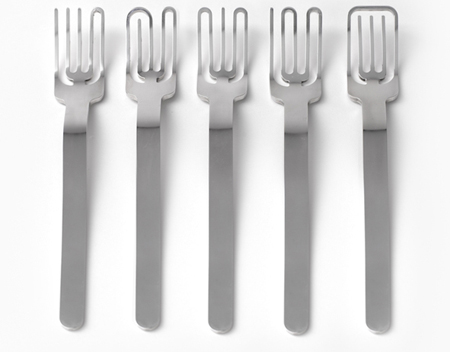 In yet another attempt to discourage the meat eater, Swiss collective Postfossil created a collection of housewares called “Trattoria Utopia“. Recently on display at the Milan furniture fair, part of the series includes a set of useless silverware consisting of round-tined forks and a dull unpolished knife — neither of which appears capable of penetrating warm butter, much less a NY strip.

And not unlike PETA’s less than subtle attempts to piss on the carnivore’s campfire, the impractical utensils were created merely as an attempt to discourage and provoke — not necessarily to be mass-produced and sold at Crate & Barrel.