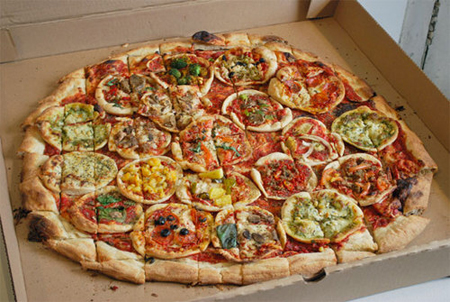 The Recursive Pizza is the work of artist John Riepenhoff. Officially titled Physical Pizza Networking Theory, it was created as part of a collage show at a Milwaukee art gallery.

Described by the artist as ‘an attempt at providing some perspective to the viewer of the levels of experience they might be having outside of the pizza.’ Riepenhoff even goes on to use such obscure terms as mise en abyme and prattles endlessly on the experience of this mix of sauce, cheese, and crust.

We’d like to think that most people prefer their pizza with a bit less pretentiousness. And those who got to ingest this ‘piece’ weren’t necessarily looking for an ‘experience’, but rather just excited by the sight of an open pizza box.

The pizza-on-pizza concept is also far from original. At least when The Onion did it, we were spared all the art babble.