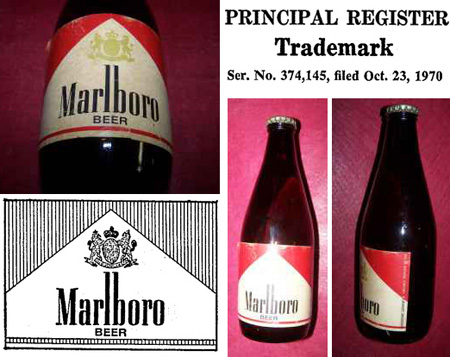 Drinking and smoking — they go together like peas and carrots. Well in the early 70’s, tobacco giant Philip Morris wanted to take that concept a bit further with Marlboro Beer. After acquiring full ownership of Miller Brewing Company, Philip Morris decided to bring the dynamic duo together… on one bottle.

And if you’re thinking that this is merely my mad photoshop skills at work… the proof is in the patent. Filed by Philip Morris in 1970, and dug up by box vox — it clearly shows intent to bring the smoker’s beer to the masses.

Plans for the beer were eventually scrapped, but think of the possibilities. Marlboro Light Beer in big gold cans, beer in soft packs like Capri Sun… and judging by the current beer industry, Marlboro Menthol Ale would’ve been inevitable.