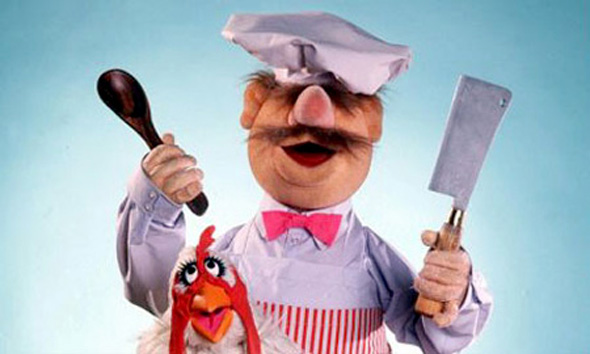 In these commercials from the 50’s and 60’s—including some from Henson’s first TV show ‘Sam and Friends’—we get a glimpse into the sketchbook phase of the characters that we know today.

These spots for Wilkins Coffee ran locally in Washington D.C. and featured a few of the first Henson-voiced Muppets. The short commercials also introduce us to Henson’s effective marketing technique of Gratuitous Violence Towards Muppets.

Here we get to see a very early, black and white version of everyone’s favorite frog. Kermit goes on to shill for Esskay Meats, where he actually sings about the greatness of sausage and eating bacon—perhaps a prelude to dating Miss Piggy.

Munchos Commercial, featuring a not yet realized Cookie Monster [1969]

This is a great example of the Muppet empire taking shape. In this Munchos commercial from 1969, we see a character that obviously became Cookie Monster—once the processed, imitation potato chips were replaced with chocolate chip cookies.

Sesame Street and Beyond

We’d like to think that any food-related material henceforth was a result of Jim Henson never forgetting where it all started.

A fully realized Cookie Monster singing about his favorite topic of food. In addition to food-love, music appreciation was always evident in Henson productions, as he shows here with a nod to the Beatles.

Planting a Garden with Elmo and First Lady Obama

The First Lady Michelle Obama stops by The Street to help Elmo and some kids plant a garden. This aired around the time that The First Family was promoting the new White House Garden, which to our knowledge contains no talking produce.

Before The Food Network, there was Swedish Chef; the original bumbling, cooking idiot. To this day, Swedish Chef is one of the most popular of all the Muppets and the inspiration for this list. Bork, Bork, Bork.

Emmet Otter’s Jug-Band Christmas was as much an annual tradition as putting up the tree or hiding from your crazy uncle. Here we see our Jug-band up in the tree playing an ode to their favorite cooking method. The one-hour special lives on as a classic on DVD, as well as great tributes to Barbecue.

So there you have it. What do you think?