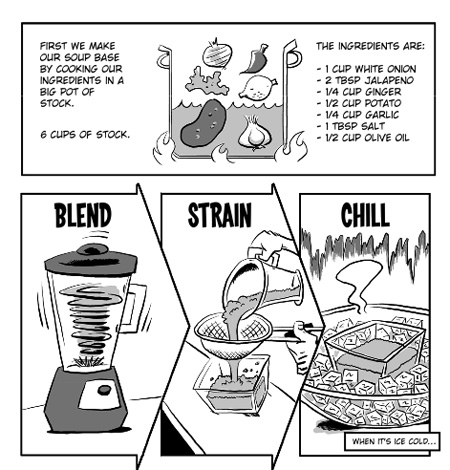 With hand-drawn and artist-rendered recipes becoming more popular, it only makes sense that an entire cookbook would eventually go the visual route. Amanda Cohen, the chef/owner of NYC’s Dirt Candy, has signed a deal to create a cookbook in the form of a graphic novel.

My problem has always been that I couldn’t think of a reason to add yet another cookbook to the already crowded shelves, but that all changed about a year ago when I had an idea for the kind of cookbook that would work for Dirt Candy: a graphic novel cookbook. I’m not sure if “graphic novel” is the best term here since it’s a cookbook and not a novel, but that’s the best description I can come up with.

In the same way that the term ‘graphic novel’ was coined to give adults an excuse to still read comic books, perhaps we’ll eventually need to come up with a truly original term for a comic/cook book. Might we suggest ‘culinovel’, or ‘comiculinatorium’? Please no one steal those.

[thanks The Food Section]