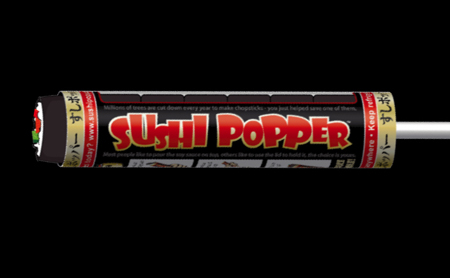 Just when you thought sushi culture hadn’t been bastardized enough—enter the Sushi Popper. According to the Sushi Popper website, “We’re passionate about portable sushi and spreading the word about eating it in places where it was never possible before.” Also be forewarned that reading the FAQ’s on their site will almost certainly make you dumber.

Has the concept of portable food gone a bit too far here? Granted there are already forms of portable sushi for those too busy to sit—even in Japan. Only now we’re dealing with America’s corn dog culture, which believes that any food is better if impaled on a stick. We suppose that if you were to follow the trajectory of sushi culture since its Americanization… A sushi-lolli seems about right. 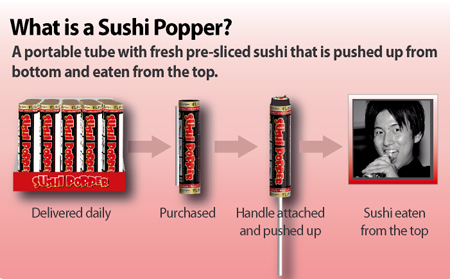 This isn’t to say that we wouldn’t want samples of these immediately. We would even get pictures of someone actually ingesting one. Unlike the people on the website who appear to be either posing for the cover of a skin-flick DVD, or genuinely horrified.

More photos of the Sushi Popper can be found on foodiggity’s Facebook page.