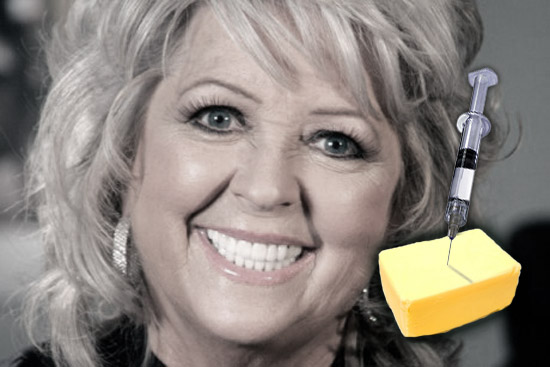 What is practically old news at this point — Paula Deen, the Food Network personality and ‘Queen of Southern Cuisine,’ recently announced that she has Type 2 diabetes. For those even vaguely familiar with Deen, the news, although not terribly surprising, is somewhat sad. But as we dig deeper, the saddest part in all of this, is actually that her recent announcement isn’t news at all. And it turns out that the whole story becomes one-stop shopping to address a few issues plaguing this country. From corporate and individual greed, to our collective attitude towards food and diet, and the corruption of our healthcare system. Let’s review.

Appropriately labeled, “The Butter Queen,” Deen promoted unhealthy eating and lifestyle for years. She had her ‘Southern’ cooking shows, put her name and face on cholesterol-influenced cookbooks, and shilled for her deep-fry-facilitating products. But over the past three years, she did so knowing that she had diabetes. Although she’s said it remained a secret because it was something that she, “needed to digest,” she conveniently absorbed it around the same time a new endorsement came calling. Enter the morally bankrupt and deep-pocketed world of US pharmaceuticals.

“Have a problem? We have a pill for that.” It’s the American way. Although in this case, it’s an injection by Novo Nordisk called Victoza — a daily treatment that would cost a diabetic around $500/month. And why this drug will only continue to get more expensive? They not only have a ‘celebrity’ spokesperson on payroll now, but creative types need to design campaigns with only the germ that is Deen’s Southern charm to go on, and copywriters will get paid their pharmaceutical wages making sure that “y’all” is always spelled correctly.

So now Deen, who has for years lined her pockets with chicken-fat-stained hundreds, will now do so with clean crisp bills from a legal pusher. It remains to be seen if she will continue her incalculable hypocrisy by continuing her endorsement of unhealthy eating, while also shilling for its solution. Or, perhaps she’ll actually make some half-ass attempt to save face and now promote healthy eating. Either way it doesn’t matter, does it? Eat all the Krispy Kreme Burgers you want, because Paula Deen also has what ails you… y’all!