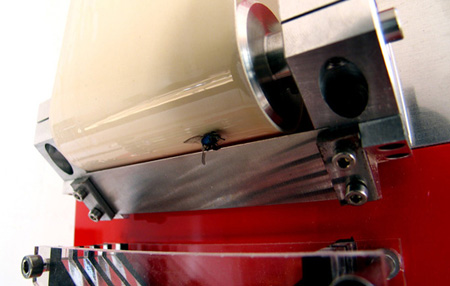 Is that coffee table that you picked up at IKEA not earning its keep? Is your wall clock not as involved in the game of life as you’d like? Well, designers James Auger and Jimmy Loizeau have created some rather disturbing furniture, such as a fly-powered clock and a coffee table that controls your mice population.

As Auger explains, “A fly buzzing around the window suddenly becomes an actor in a live game of life, as the viewer half wills it towards the robot and half hopes for it to escape.”

The fly-killing clock can be seen in the video below. And if you are concerned with energy efficiency while you kill critters, eight dead flies will keep it powered up for 12 days.