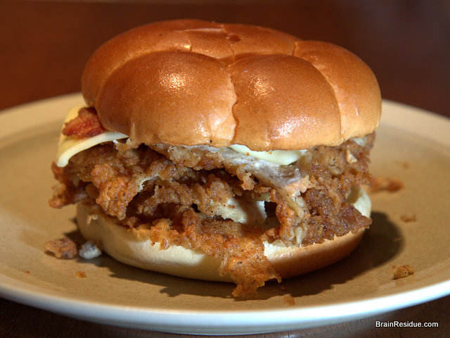 KFC would appear to have made a sandwich consisting of only chicken skin. That is of course if it wasn’t complete bullshit and merely the work of another mouth-breather seeking a web meme.

KFC is certainly no stranger to the culinary freak show, which makes this concept almost plausible. But the ‘review’ itself cryptically admits to being a fake. At least the Dry Erase Job-Quitter had the cognizance to include a hot chick.

Although, it would have been fun to walk into KFC and just say, ‘Gimme some skin!’. The cashier would certainly oblige with a high five, and then you go, ‘Down low!’ and pull your hand away and exclaim, ‘too slow!’ and then you and the cashier would laugh and laugh until she asks, ‘Are you going to order something or what?’… That would never get old.

[link, via Geekologie <–appears to have fell for it]