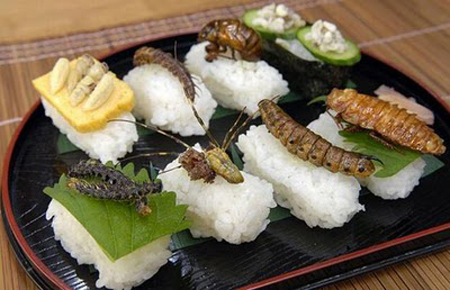 Japanese chef Shoichi Uchiyama gets creepy-crawly with his sushi recipes that use insects as the primary source of protein. Although his concept is nothing new — Uchiyama wrote an insect cookbook in 2008 — he continues to lobby for the use of bugs as an alternative and more sustainable protein source.

For anyone who has ever had shrimp — commonly referred to as the ‘bug of the sea’ — this should be a natural progression. Perhaps there might even be an entry level ‘California bug roll’ for the squeamish.

Test out your gag reflex with more bugs-on-rice photos over at foodiggity’s Facebook page.