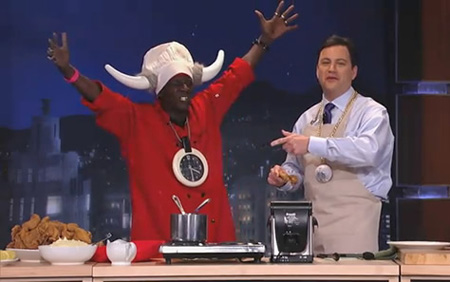 Everyone’s favorite hip hop legend/reality television punchline Flavor Flav stopped by Jimmy Kimmel Live last night to fry some chicken. In what could be the greatest late night cooking segment of all time, Flav was there to promote his new restaurant, aptly titled Flav’s Fried Chicken.

Claiming to be the ‘biggest thing that’s come through Clinton (Iowa) in years”, Flav’s Fried Chicken owes its success to something called FFC (Flavor Flav Crystals). No mention if that is the official street name of this concoction, but Flav was more than happy to share his version of the Colonel’s blend — appropriately rolled up in a zip-loc.