With the New Year comes a fresh set of 365 days and empty promises. Some people will strive to make the new year the best ever, and it all starts with making their New Year’s resolutions. Unfortunately, once the resolution-maker realizes that a new year means nothing more than having to buy a new calendar, most will revert back to last year’s undesirable form and behavior by Valentine’s Day.

We explore a few popular resolutions that are consistently heard every year — usually from the same people — and provide some insight on why they end up a steaming pile of failure. 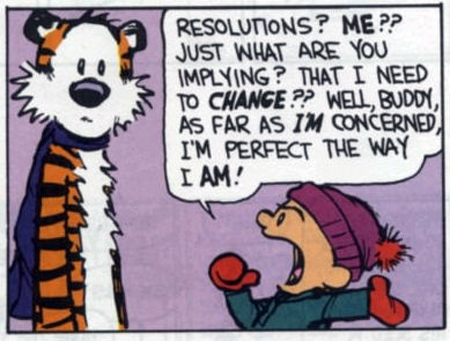 If you insist on a new and healthier eating regimen in the New Year, or [shudder] joining a gym, don’t expect to make it out of January any closer to your target weight. Chances are that the decision to be healthier is only based on the abuse that your body took during the holidays, and not for any actual long-term effect.

Gyms are also chomping at the bit for those who’ve made this resolution, providing special New Year deals and openly antagonizing you to ‘shed those holiday pounds.’ They will gladly take your monthly membership fee, knowing that you’re also too lazy to cancel the contract.

Perhaps the most popular and the most unfulfilled resolution of the New Year. Those who smoke will probably tell you that they smoke to combat work or life-related stress and anxiety. Smokers will usually try all year to kick the habit, and most will fail. So why would a new year be any different?

In fact, at the start of a new year, the odds are not in your favor. Once that fuzzy holiday feeling and temporary lull in stress wears off, bosses and clients will quickly go back to their routine of making your life miserable. A new year means new budgets and fresh starts, and they’ve probably made their own New Year’s resolution to make more money for themselves at your expense.

Starting whenever you wake up on New Year’s Day, giving the liver a rest always seems like a good idea. But the holidays are now over and the harsh sting of reality and the return to your mundane routine is imminent. And it’s a lot harder to take when sober.

Unless you’ve also figured out a way to make money without having to deal with other people, then this resolution doesn’t stand a chance. Around mid-January, people who made this promise to themselves will realize that their co-workers didn’t do the same, and are still doing just enough work to not get fired. And half-assing is highly contagious.

“I’m going to be a better person.”

If you feel there’s actually a need to declare this openly, then you’re obviously an irretrievable asshole. Sure, in the coming weeks you might hold the door open for a coworker, or actually thank your barista when they hand you your soy latte. But how long will that last? Best guess… until you also fall off one of the other good intention wagons seen above — or until you realize that nobody is buying your New Year-induced bullshit.

Happy New Year Everyone… And please let us know how the resolutions go.