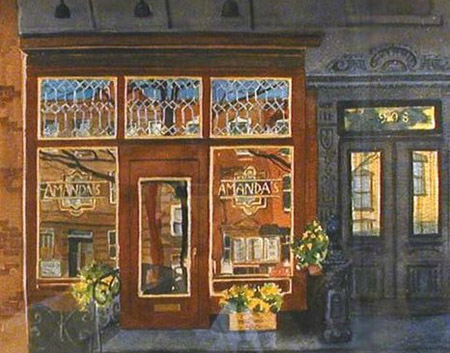 Here at foodiggity, we were psyched to be invited to participate in The Wandering Foodie’s 93 Plates Project. It was also cool that Hagan would be heading across the river from NYC to hang with some ‘bridge and tunnelers’ here in New Jersey. Amanda’s in Hoboken is legendary for its brunch and is consistently rated one of the most romantic restaurants in Hoboken… This could get awkward.

“Bloody’s” were going to be a requirement this day. At Amanda’s, Eugene’s Bloody Mary is named after the owner who we would be meeting later. Now, if a drink is any indication of the namesake’s personality, then we would certainly be meeting a big, loud, spicy fellow. However, Eugene himself was not only the polar opposite of the drink that bears his name, he was nice enough to share the method for his Mary madness. Amanda’s process of using sun-dried tomatoes infused with vodka is what makes this a top notch Bloody Mary… We were getting off to a great start.

I ordered Poached Eggs with Crab Hash and Orange Hollandaise. Coincidentally, foodiggity recently posted a recipe for our own version of hash. So I decided that I would challenge Amanda’s to a little Hash Throwdown. Of course this challenge would only exist in my mind and without a Food Network camera crew and the Flay pomposity. 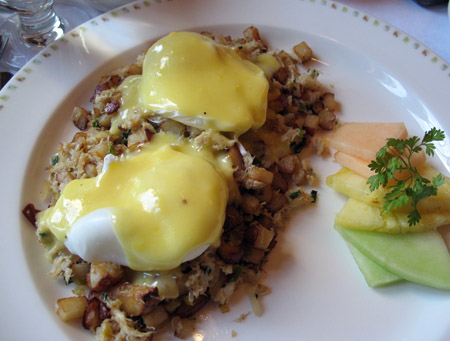 First bite in. Um, ok then… Perhaps I had issued this imaginary challenge in haste. Maybe we can just go our separate ways and forget this silliness ever happened? No hard feelings Amanda’s. You can continue to serve your perfectly executed hash, and I will stick to making wiseass remarks on my fledgling food site. Seriously though, a better plate of crab hash/crab benedict you will not find. I just want everyone to know that you won’t have any more trouble from me. Cicc’, a porta!

With empty plates, full bellies and a buzz, we were ready to head back out to the frozen Jersey tundra. That is when we were asked a question that neither of us had ever heard following a brunch… “Would you gentlemen care for dessert?” It took some arm-pulling but before we knew it we were staring down the Panna Cotta with Fresh Strawberries and Pistachio Crème Anglaise. 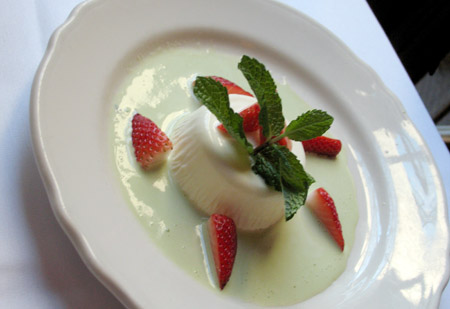 After stating emphatically that we would only indulge in a taste, there was soon nothing left but a few lonely strawberries lying in a shallow, pale-green puddle. That was until Hagan and I broke out spoons and the remaining crème anglaise was gonzo as well. It was a proud day for all.

So what have we learned today? Do not judge a drink by its maker and vice versa. And although Hagan was great company and a good host, Amanda’s is a ‘take your spouse there and surely get some’ type place.

Hagan’s take on Amanda’s can be found here at The Wandering Foodie.